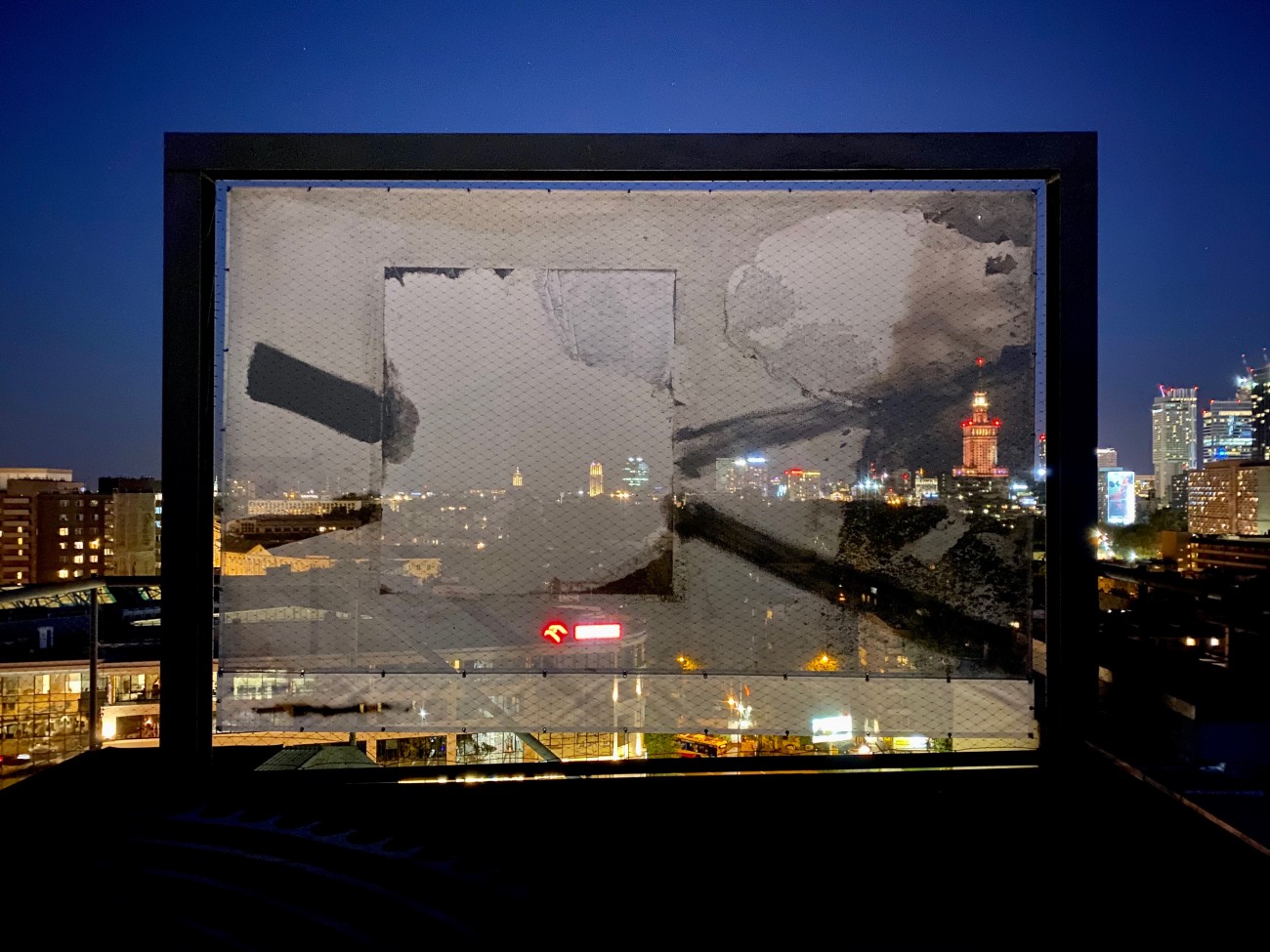 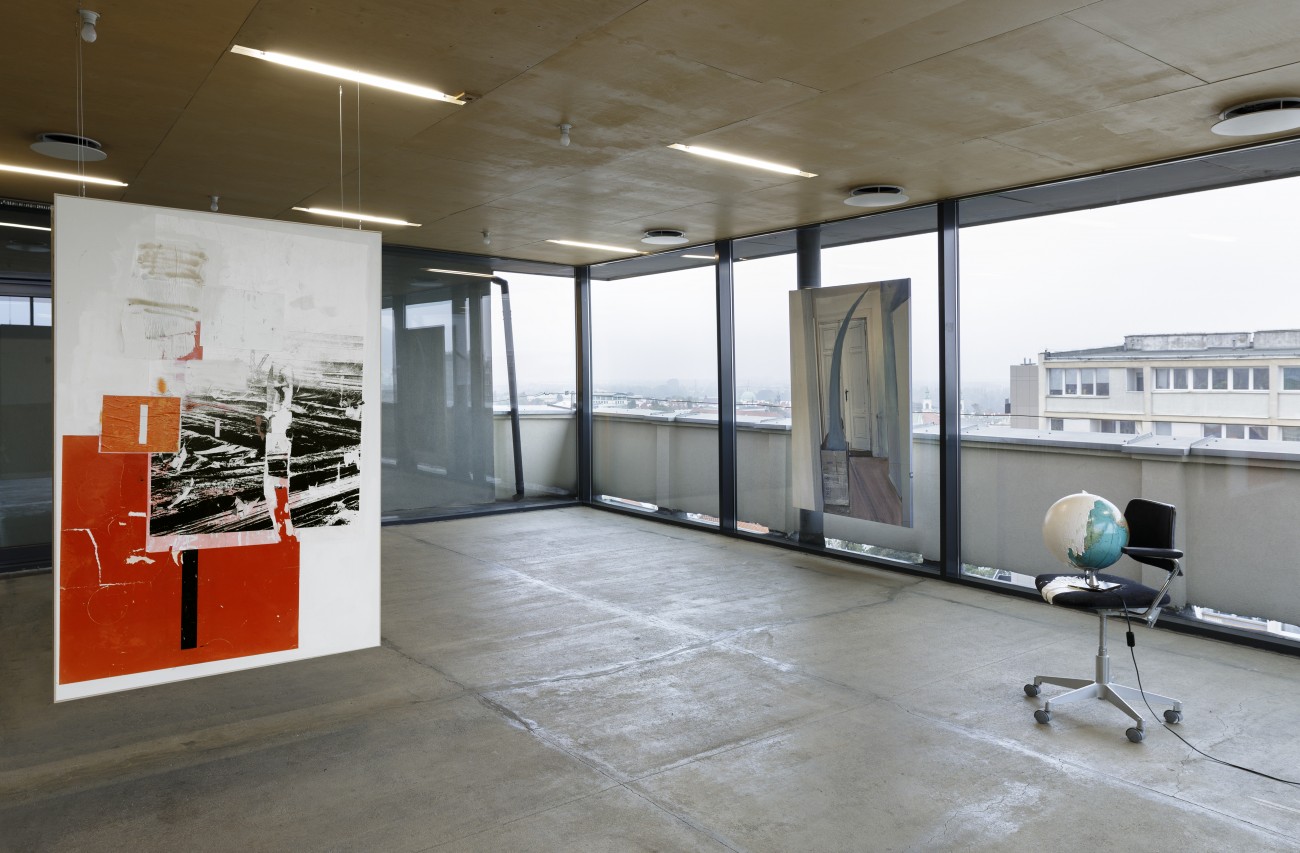 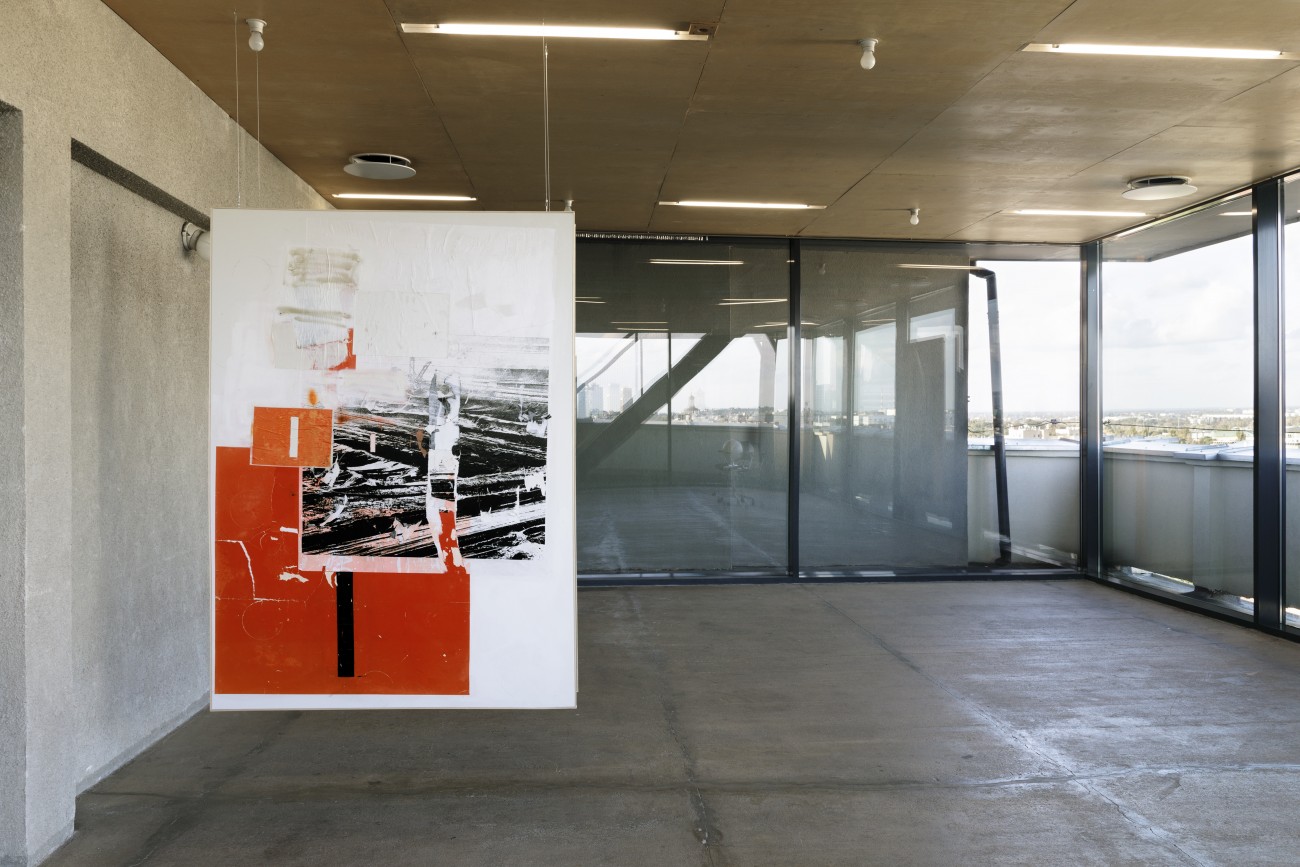 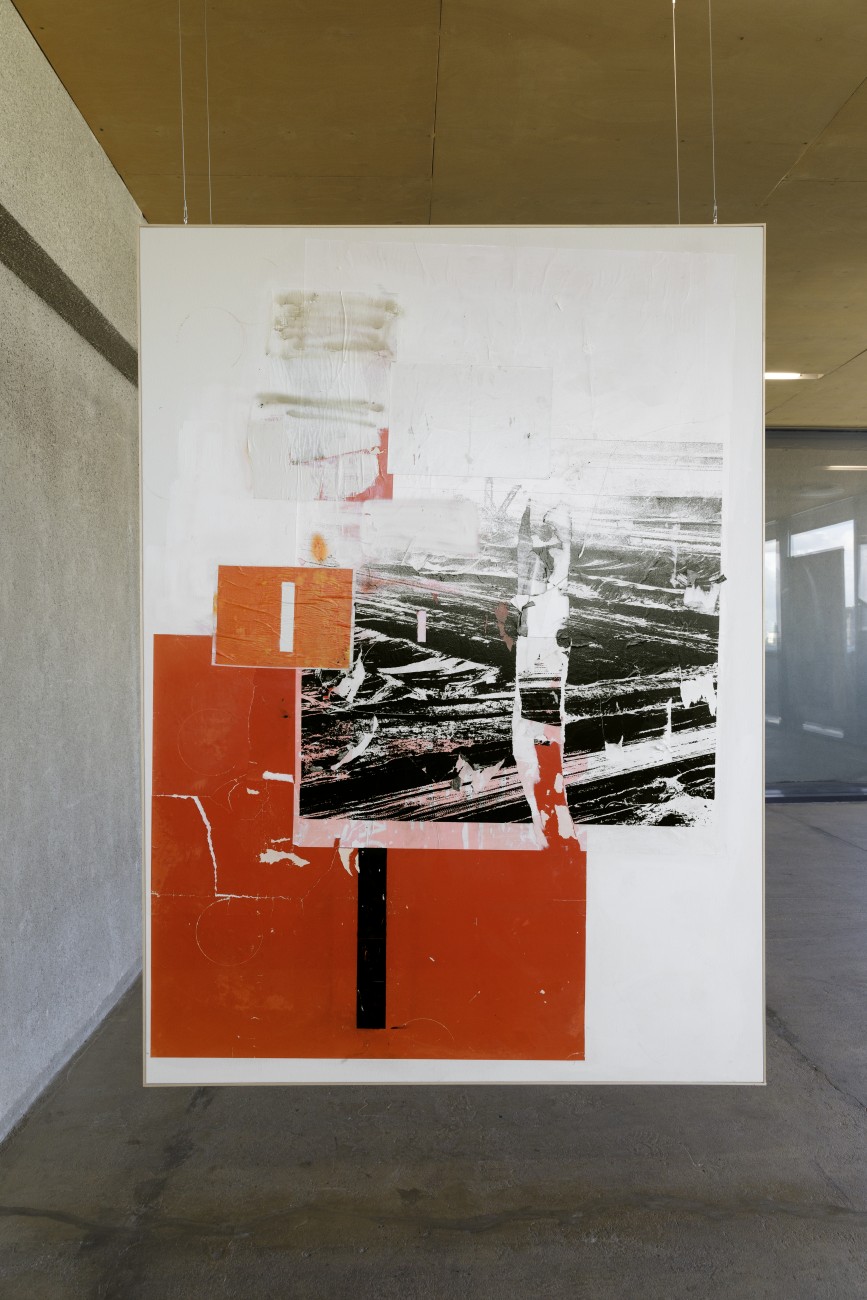 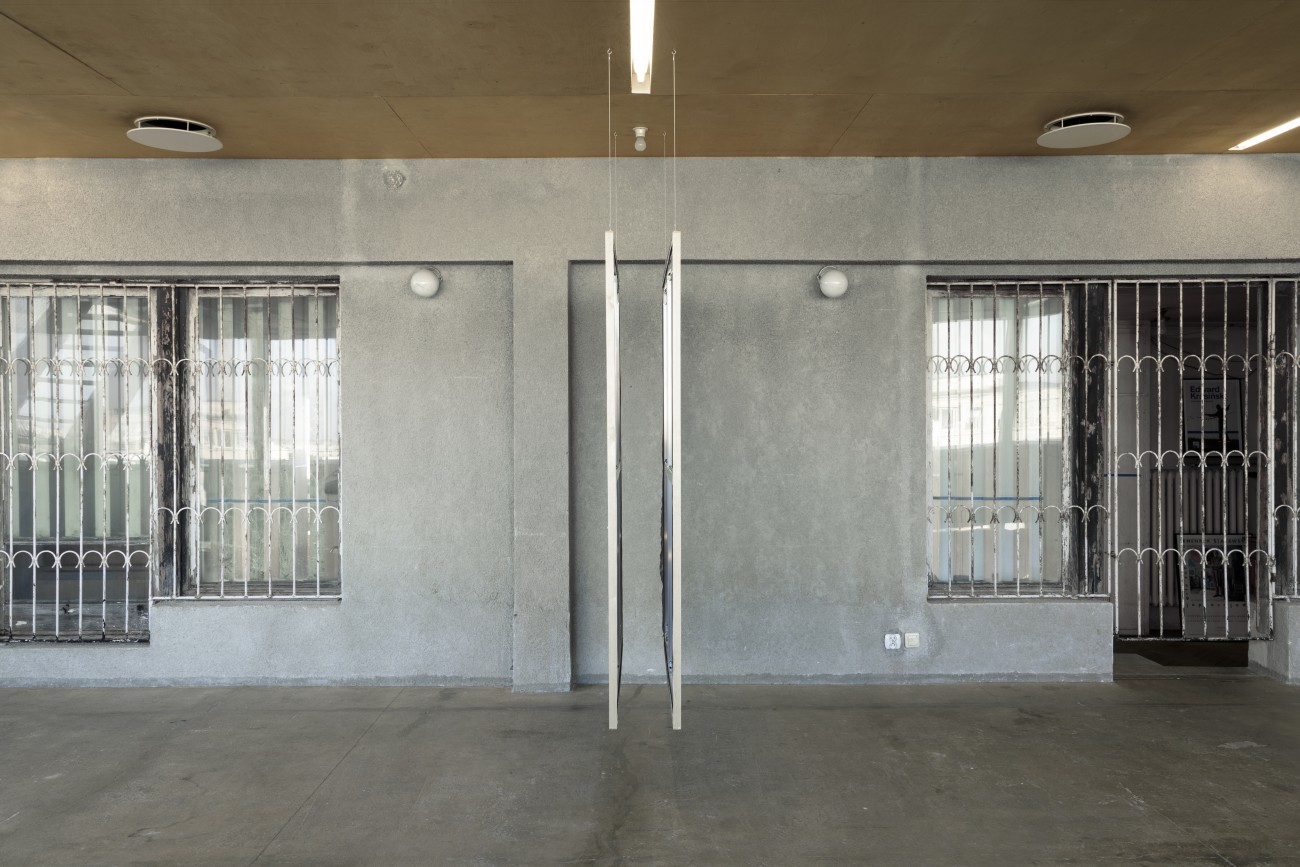 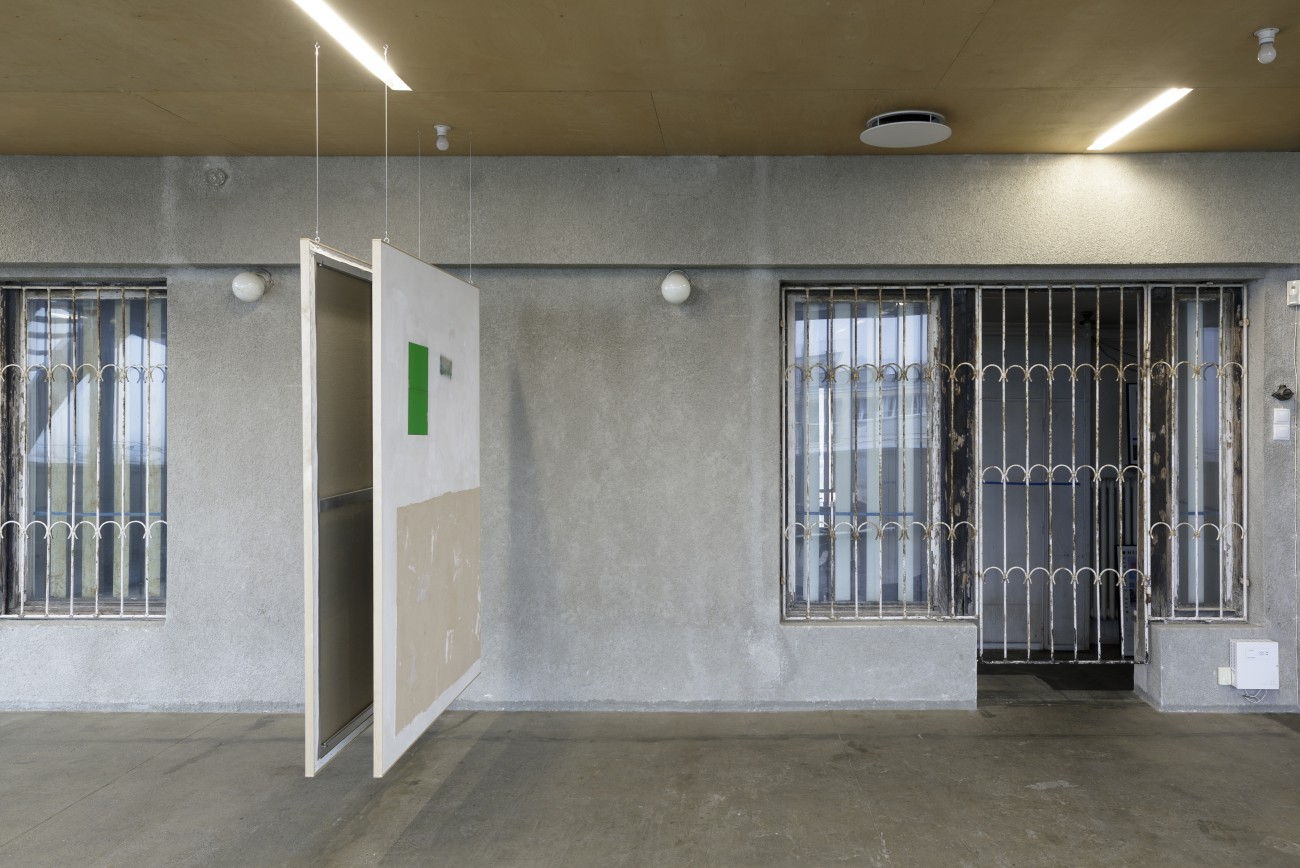 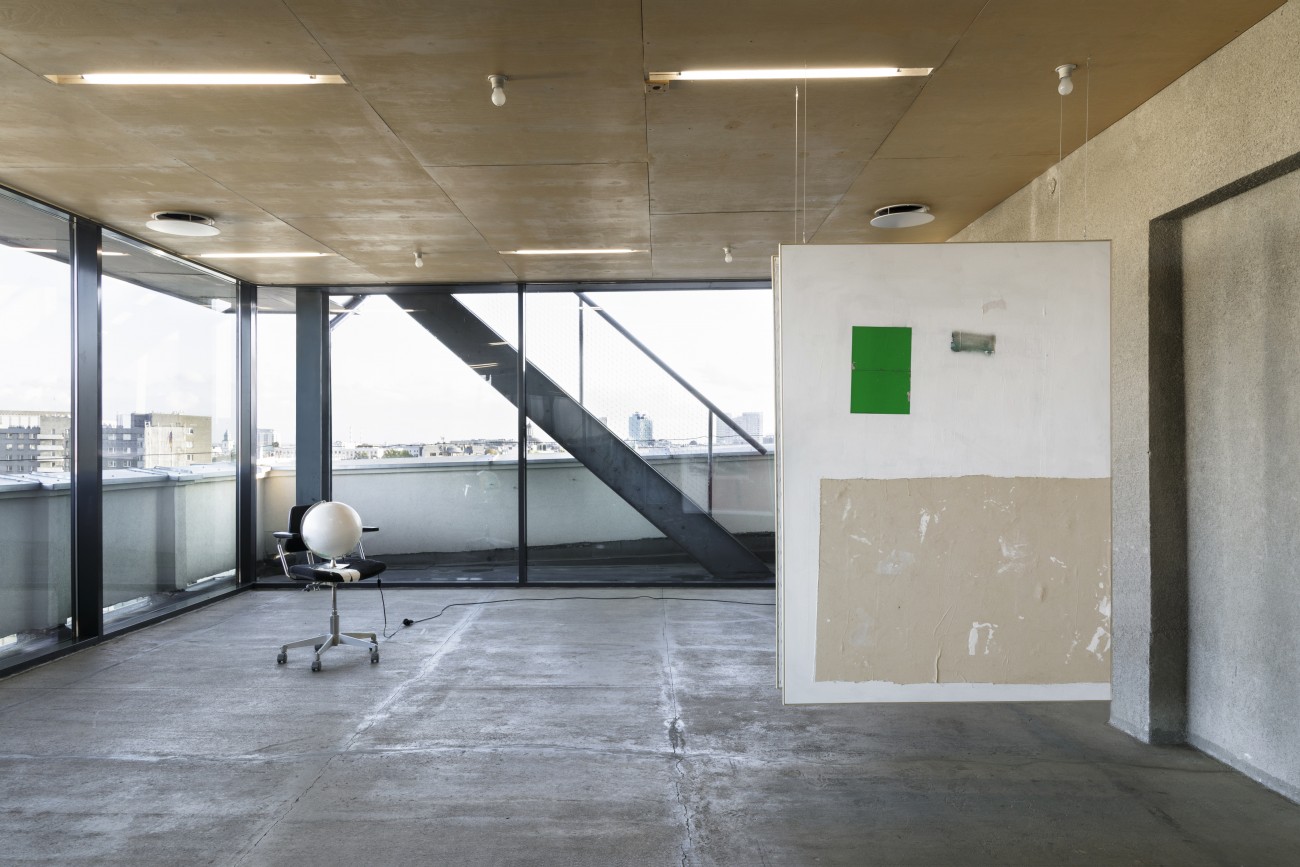 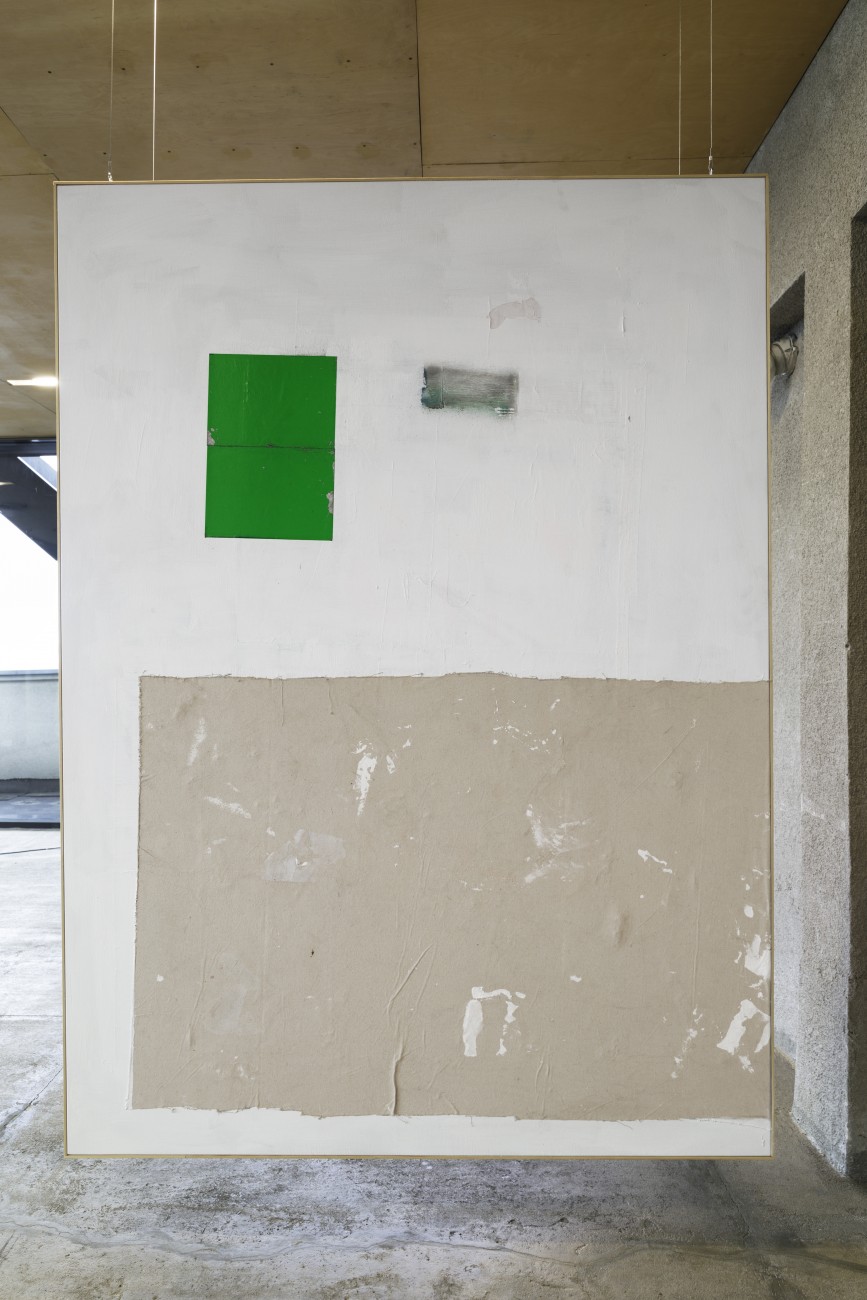 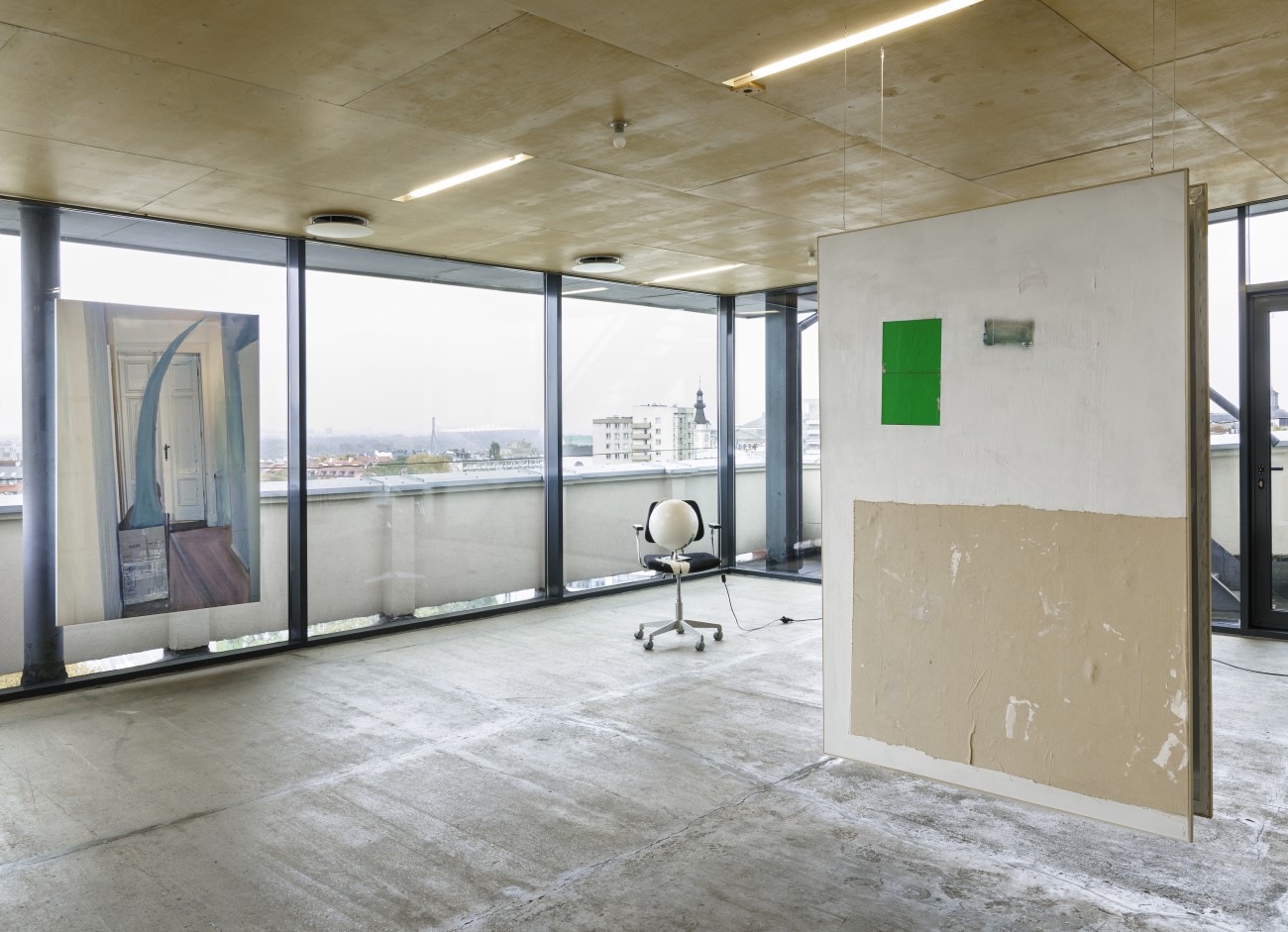 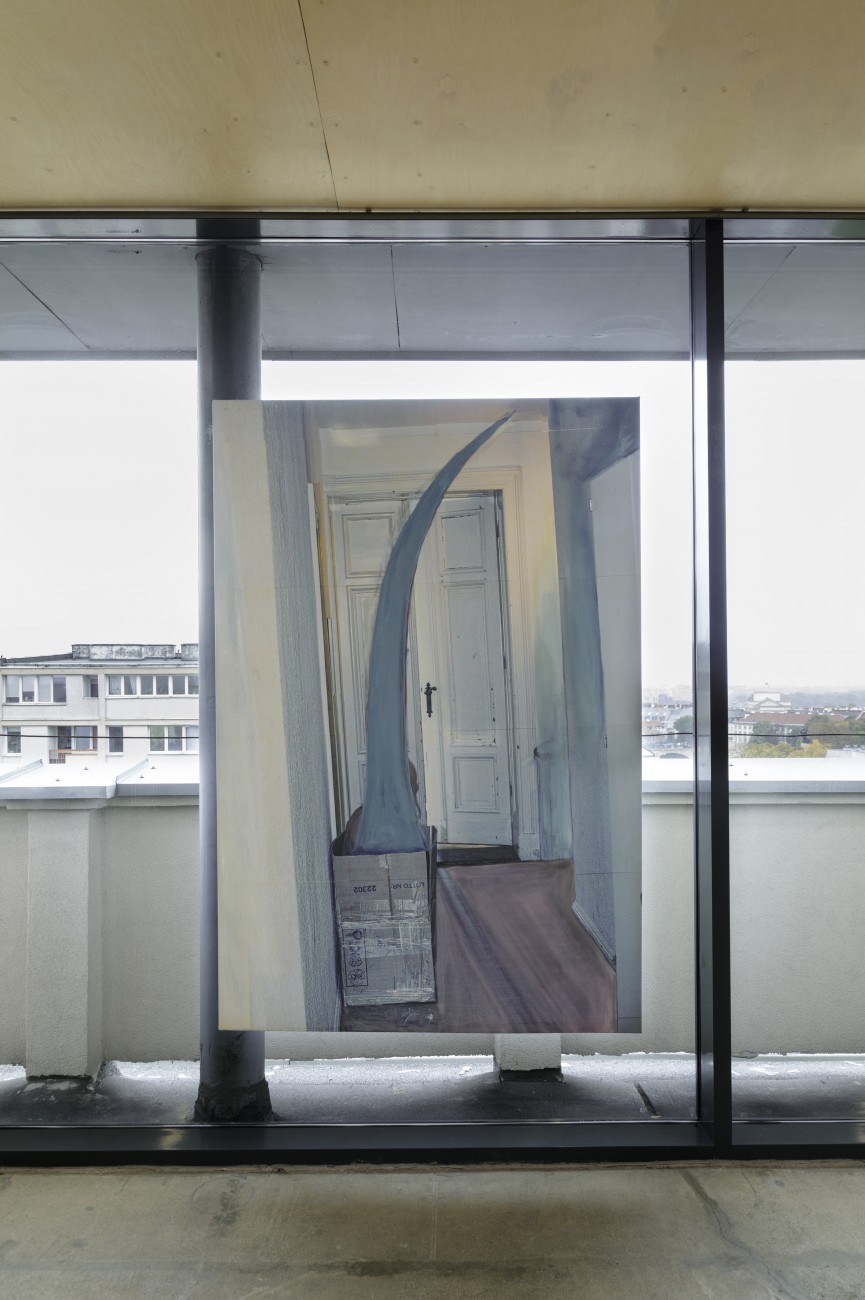 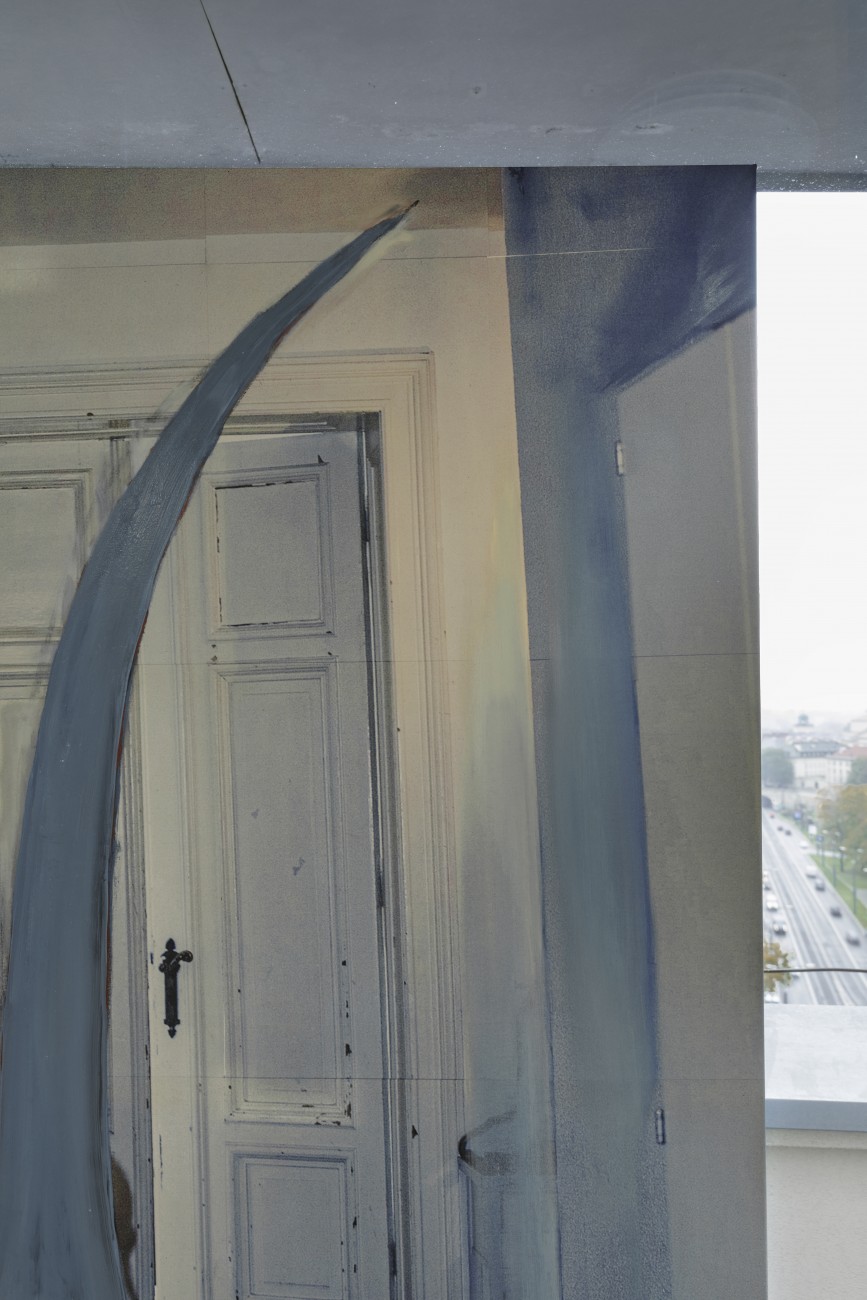 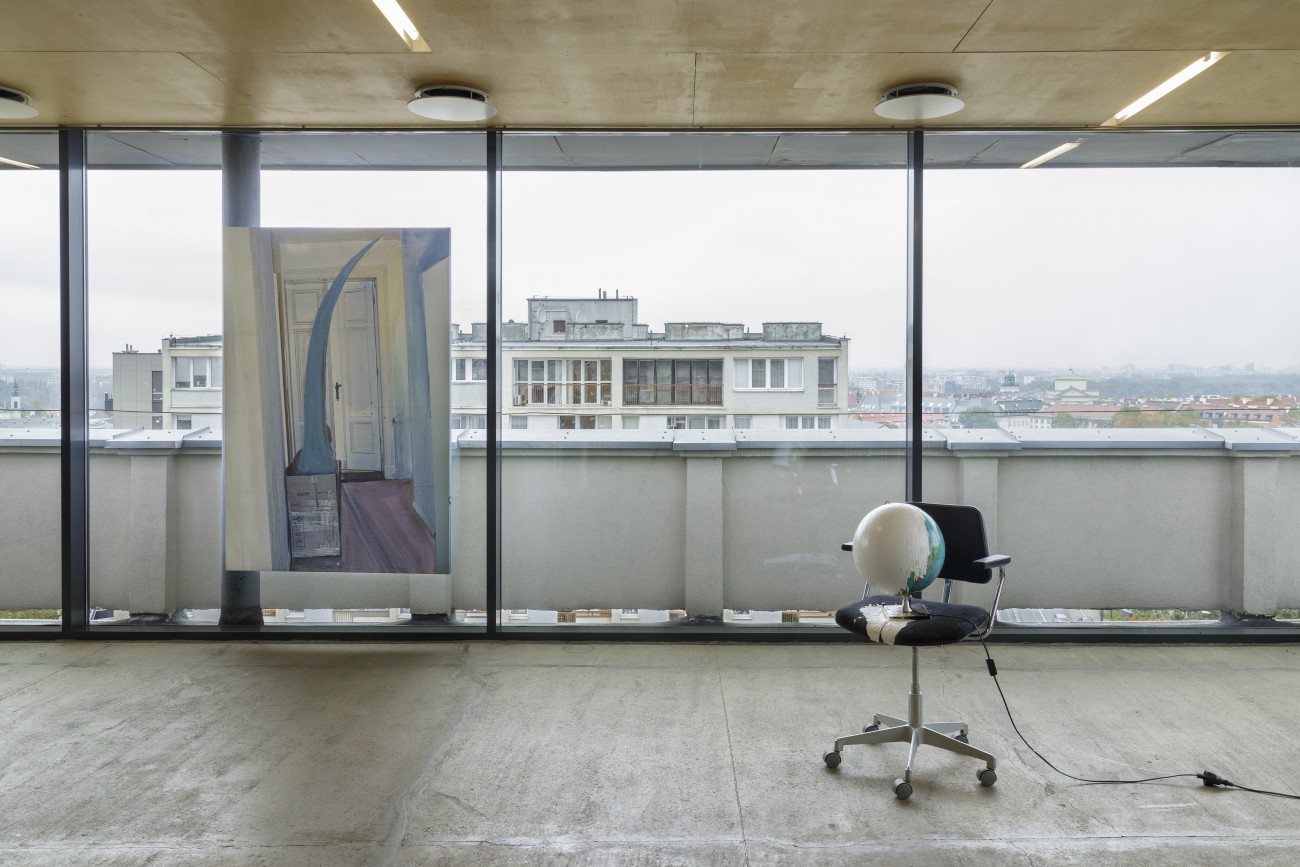 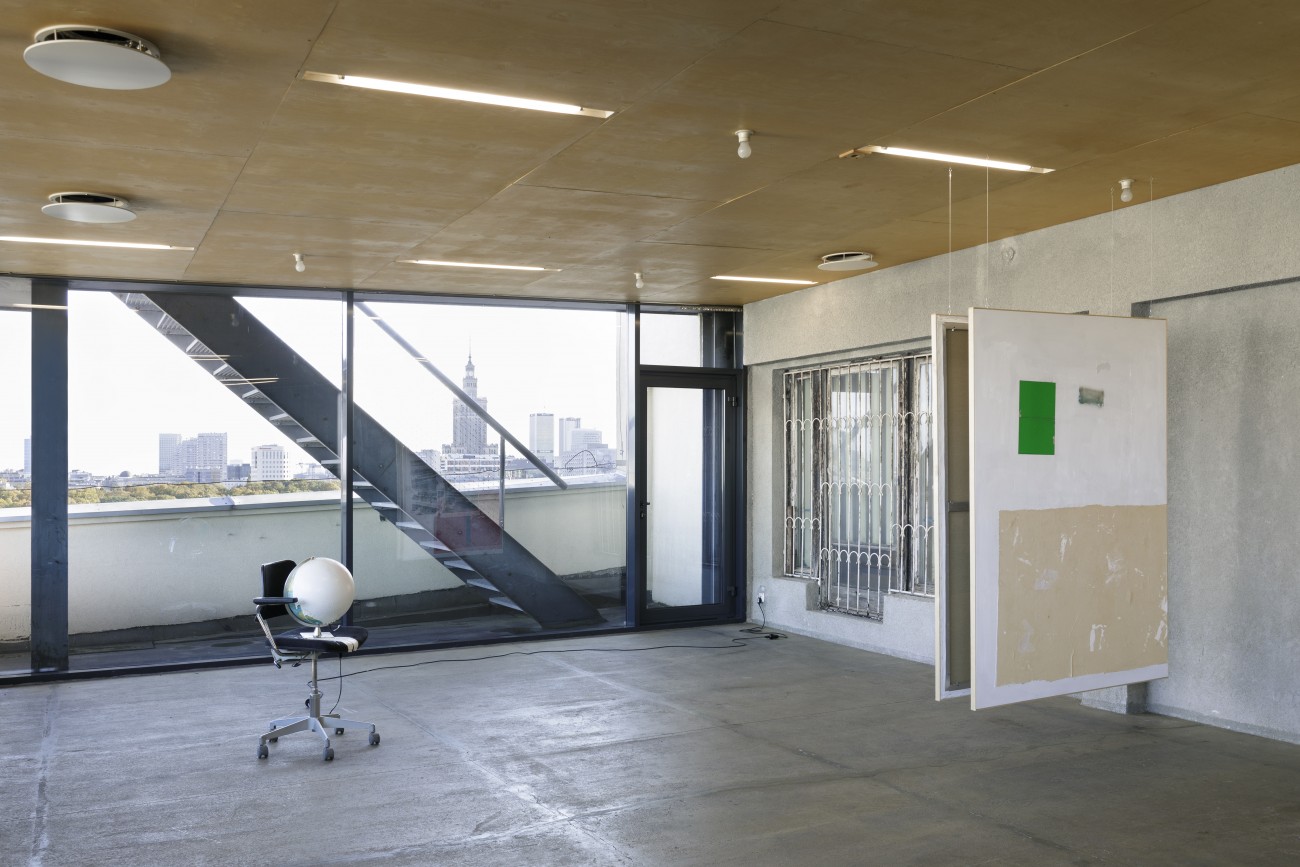 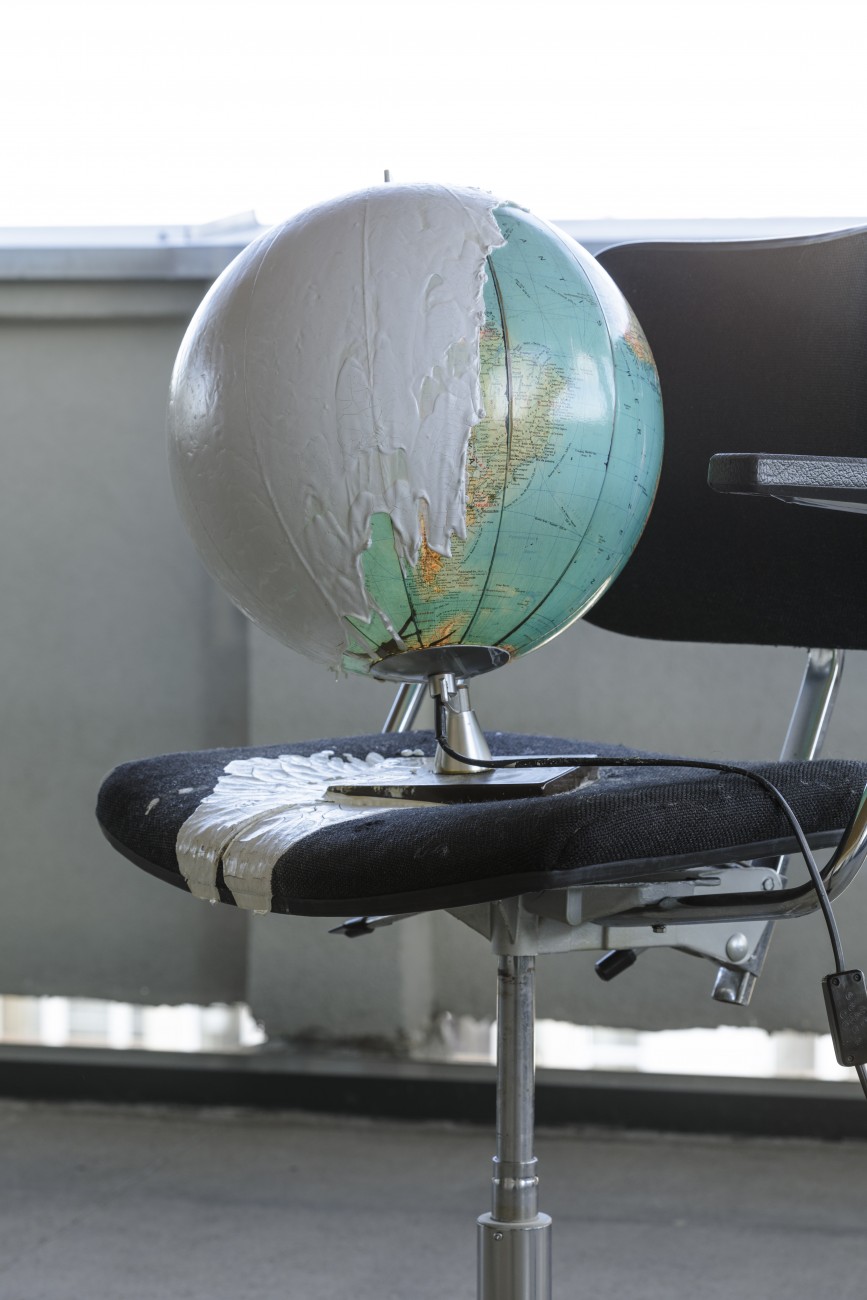 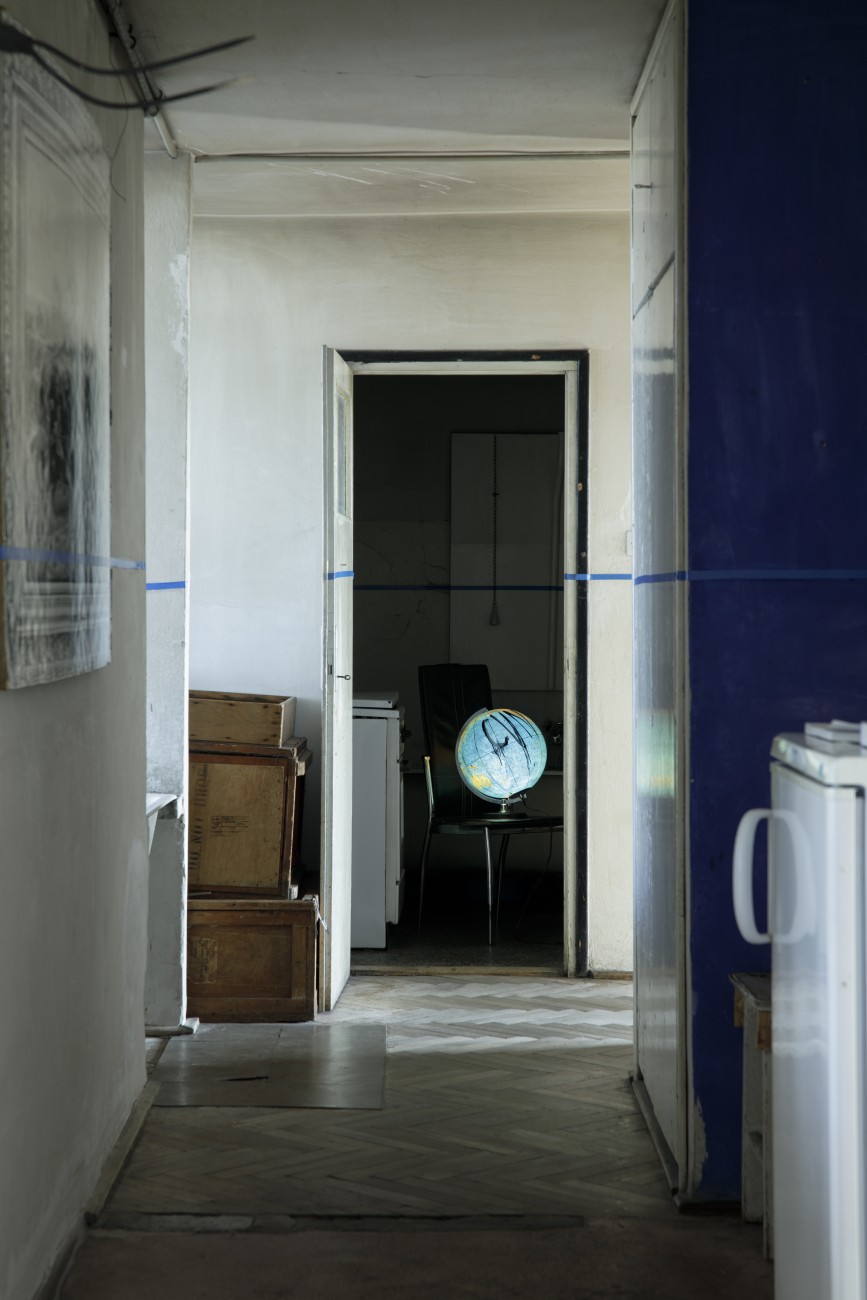 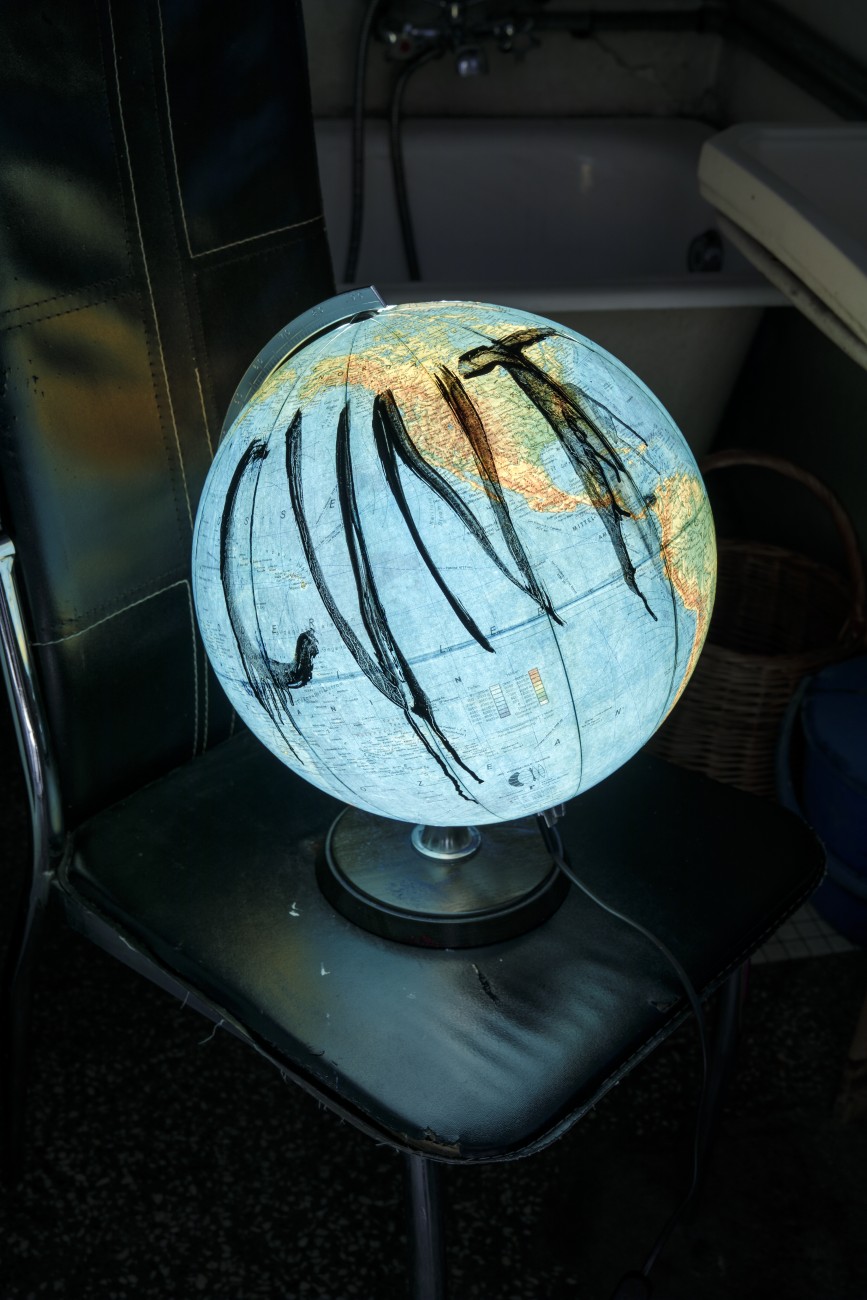 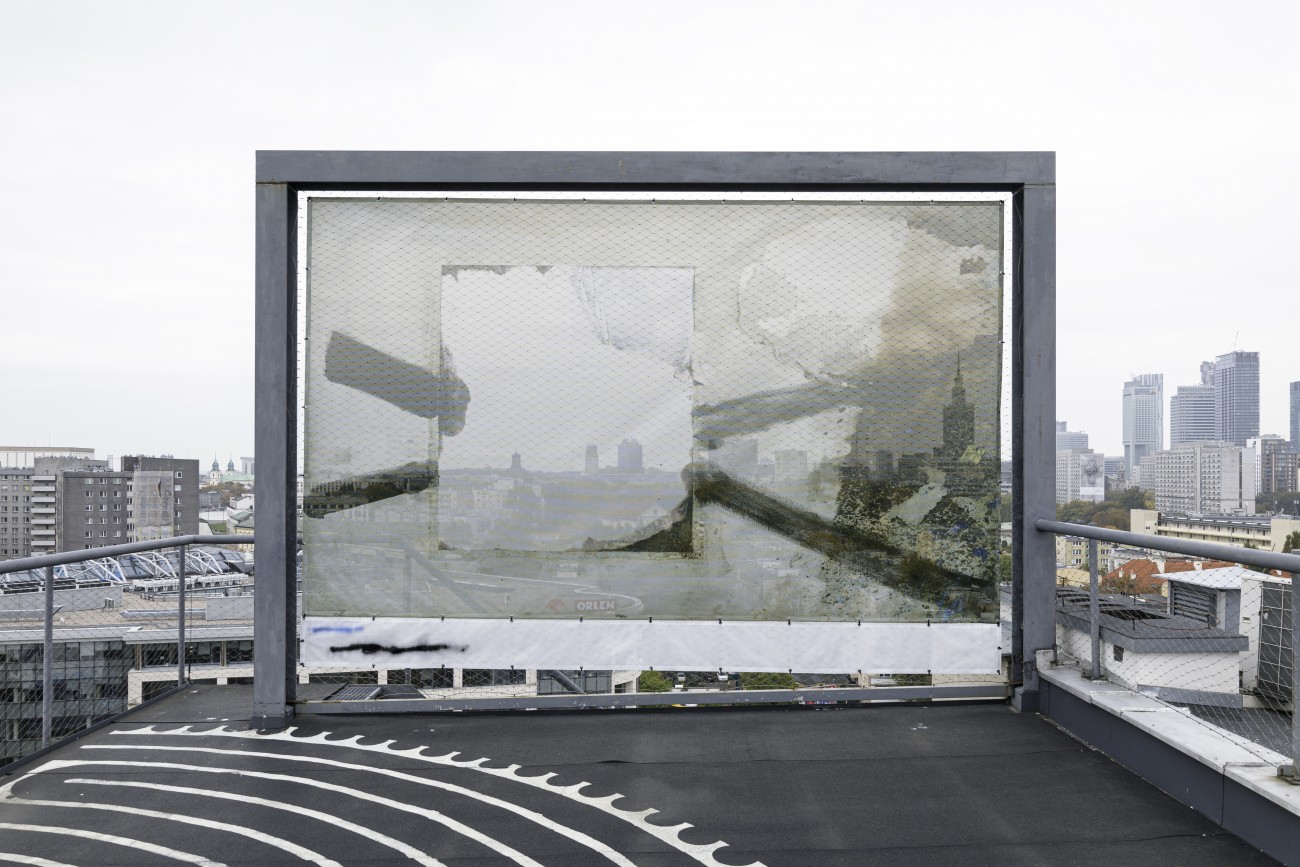 David Ostrowski’s works are characterized by bold and radical experimentation with abstract painting, referencing its elementary and primal aspects. The artist uses basic and low-cost materials, applying them in reduced and decisive gestures.

Tobias Spichtig is an author of paintings, sculptures, and objects, an artist fascinated with the practices of environment art. His site-specific interventions and installations explore themes of claustrophobia, deadlock, where the spectator is cast in the role of an intruder. His paintings frequently deal with the ambiguity of the category of the sign, its cultural connotations and transformations.

Overtone at the Avant-Garde institute is the two artists’ first joint exhibition. In his recent paintings, titled F Atelier von oben [Studio from Above], F Schreibtisch aufgeräumt [Desk cleaned up], or F Welt von vorne [World from the Front], besides paint and lacquer in the basic colours, Ostrowski uses materials found in his studio, such as black-and-white photographs or pieces of paper and cardboard, producing a collage of linear, geometric forms based on memories of his first visit to Edward Krasiński’s studio in 2018. The narrative so created is also a story about the practice of an artist who rejects the traditions of figurative painting and conventional abstraction while seeking inspiration in a studio once shared by avant-garde artists.

It would be wrong to think of Ostrowski’s art in terms of singular paintings or recurring individual motifs; even when attention is fixed on the different details, everything fulfils itself only in the relations between the works and in the context of the exhibition-space architecture. That is why on the Institute’s terrace the artist is presenting a work created specially for the show, which claims for itself a steel screen protruding over the surface of the roof. Based on a small-format painting from 2009, remade several times for Overtone and initially rejected in the selection process, the work returns as a large-format painting installation.

For Tobias Spichtig, the Avant-Garde Institute is an abstract place, one that he knows only from scholarly essays, archival pictures, or documentations of exhibitions and events held in the glass pavilion over the last couple of years. This unobvious and unspecific relation with the Krasiński Studio, which marked the beginning of the artist’s experience of the space when working on Overtone, became his key clue in selecting works for the show.

In 2017 at the Dortmunder Kunstverein, Spichtig presented a multi-element site-specific installation called Life on Earth, which dealt with the devaluation of the fundamental values of existential, domestic space – security, intimacy, stability. The interior and its architectural and décor features were connected with the compulsion to assign powerful emotional categories to every surface. The installation was deliberately destroyed by the artist, and its selected elements are on show at the Krasiński Institute, e.g. chairs, metal stands, deformed globuses separated and remodelled into independent objects. In Spichtig’s most recent painting, in turn, a misty image of an indistinct space emerges from a background consisting of a poster print-out pasted to the canvas. Left slightly ajar, the door at the end of the corridor ignites our imagination, alluding to the presence of the artist’s studio or home space, which we subconsciously anticipate.