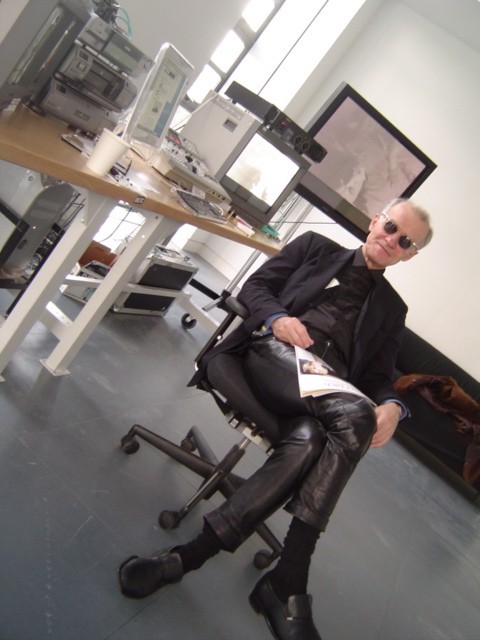 Sylvère got drunk and teased Diego, something about politics, and Diego got mad and tossed his drink in Sylvère’s face. And Warren Niesluchowski was there, and John and Anya. ... Warren’s a friend, an artworld personality and critic, a smart and cultivated guy. ... Warren knows everyone in the artworld.

Warren Niesłuchowski (1946–2019), one of the most charismatic and eccentric figures in the art world, was many things at once: an exhilarating conversationalist, a polymath, an attentive companion of artists, a polyglot translator, a networker without status, a walking bibliography, and a dandy, to name a few. And from 2003 till the end of his life, he had no home of his own, instead traveling from city to city to live as the guest of others, coming and going on his own inexplicable schedule. He lived—as he himself used to say, paraphrasing Derrida—the life of a “guest, host, ghost.”

The exhibition and the publication focus on Niesłuchowski’s homeless years, and feature his email correspondence with close friends, many of whom are remarkable artists and intellectuals in their own right; a number of artworks made about, or in partnership with, Niesłuchowski; and documentation of his travels. The emails are full of erudition, congeniality, and translinguistic twists, but are also marked by the emotional burden of being perpetually on the road. They bear witness to his role as a generous companion to others and to the inheritance of someone who was an ontological nomad by birth and by choice, permanently looking for what he called “an adoption by an imaginary family.”

In some sense, Niesłuchowski inherited his fundamental sense of dislocation. He was born Jerzy, later George or “Jeż,”to Polish parents in 1946 in a displaced persons camp near Munich. Five years later, his family emigrated to the United States, where they found themselves in New Bedford, Massachusetts. In 1968, after being drafted to serve in Vietnam, George deserted the army and fled the country for Paris. There, a lucky encounter with a friendly Englishman named Warren who loaned him his passport meant that he could continue to evade the US government. Before long, George—now Warren, after placing his own photo in the British passport—had joined the legendary Bread and Puppet theater company on their trip to Iran. His drive toward a peripatetic existence was to find its fullest expression in the last sixteen years of his life, after he gave up his New York apartment and began to live as a perpetual guest of friends and acquaintances in North America and Europe.

It should be said that his was not, other than at beginning of his life, a forced migration under the inhuman circumstances that many people on the planet are experiencing today. Niesłuchowski had the privilege of deciding to be “out of place,” to avoid any defined role, and to inhabit the periphery of social norms. His life was one of strategic exile and ontological homelessness in which he felt at home everywhere, and nowhere. The emails, artworks, and essays gathered here offer a complex picture of someone who led a radical, transcultural, and transnational existence in which art and life were no longer distinguishable from one another.

The book with the same title was co-published by Cabinet and the Museum of Modern Art in Warsaw.

12 January 20.00
City of Squatters a lecture-performance by Simon Leung in the context of Queens Museum exhibition—After the Plaster Foundation, or, “Where can we live?”
https://queensmuseum.org/events/city-of-squatters